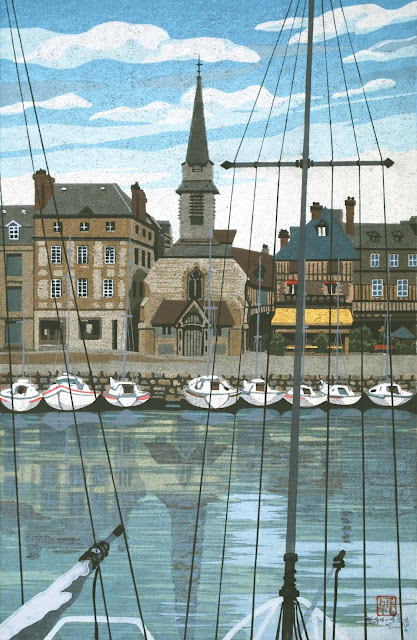 About 20 years after Masao Ido started making woodblock prints, he decided to collect materials from the Normandy region in France at the request of a collector, and went on a sketch trip with a rental car from Paris to Honfleur via Giverny, Rouen and other towns and villages.

He parks his car whenever he finds a place he wants to draw, does the sketch and continues driving. When the sun starts to set, he finishes the sketching day to stay at a small inn in one of the villages he went across.

Although it could be called an inn, there is an owner who, from a place reminiscent of an attendant`s booth of Japanese public baths, tends a store on the first floor where snacks, cigarettes, amenities, lottery, etc. are sold.

This venue also serves both as the front desk for some guest rooms on the second and third floors and as a stand bar for the locals.

The port of Honfleur, the final destination of his trip, was a tourist spot in contrast to the villages he visited before, and Masao Ido sketched many pieces:

"I want to express this sky and clouds that cannot be seen in Japan with woodblock prints."

Whereas in the West, a culture of stone, there are lithographs, in the culture of wood of Japan, the traditional technique of woodblock printing. Woodblock printing is the oldest printing method in the world, and its technology is available everywhere, not only in Japan. But the beautiful and durable Japanese washi paper, arose thanks to Kozo (paper mulberry), Mitsumata (paper birch) grown in the richly moist Japanese climate, as well as the exquisite craftsmanship of the Japanese people, allowed several colors to be rubbed in with the pad por pressing paper, and this led to the flourishing of the engraving culture, vividly represented in the Ukiyo-e.

Masao Ido spent hectic days creating fine artwork and being involved in cultural activities, dreaming of letting the world know about a part of the beautiful Japanese culture that are woodprints. I think that for Masao Ido, this was precious travel time that he couldn't have had in Japan.